During a welcome beat of my new-found stride, I went on a hike with some badass ladies tonight. We hike fast up the “M” in Bozeman. It’s like the “M” in Missoula… same same, but different. Montanans love putting letters on mountains.

Afterwards, we hung out on a bench and talked and watched in horror as Cree [Rebekah’s dog] hunted a grouse and drank my new favorite beer and toasted a new [awesome] job [for Chelsi] and basked in this Bozeman life.

When we got back to the trailhead, we said our goodbyes and I got into my car. When I turned the key, I immediately recognized the voice on the radio and was excited that I was tuning in right in time for Hillary Clinton’s speech.

I decided I wanted to drive and listen to it. So I drove to a popular lookout for sunset. A few other cars were there, awaiting the fiery sunset. I cranked the speech, cracked another beer, and watched the sunset.

I couldn’t help but think of the journey that led us to here. Me to here. I sat contemplating the person I was with—myself. I drank a beer with a coozie from Luckenbach, Texas on it. Texas. Where I was born and raised. But now I’m in Bozeman, watching the sunset over this beautiful mountain town. How I got here is quite the journey. I moved here to work in advertising. That sentence alone makes me shake my head and smile.

I’m listening to a woman I’ve grown to admire. I’ve listened to so many speeches, debates, addresses. I’ve read so much about this election in the New Yorker—who am I?? But I have a subscription now, thanks to my mother-in-law. Yes! I am married. I have a husband—how did that happen? When did I let this grown-up world become me?

I thought back to my early jobs, my early hobbies, my early boyfriends, my early voting habits [sorry about that, America], my early goals, my early dreams—all while watching this sunset and listening to this incredible speech. 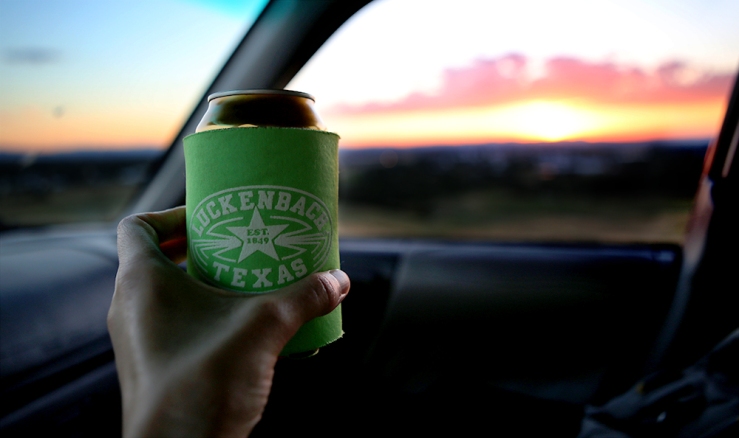 Clinton’s words, “When there are no ceilings, the sky’s the limit” rang over and over in my ears as I watched this beautiful sky. I half-smiled, because “The Sky’s the Limit” is the name of the latest tourism campaign my company executed. From dabbling in Photoshop at an office job when I was 18 to Art Director now. From women not being able to even vote to Hillary Clinton. We’re here now. I’m here now. A woman is running for president. This place, this life, this country accepts and encourages and applauds powerful women. My heart swelled, my eyes teared up, I took stock in this life and timeline and felt proud.

The sun made its final bow and the cars cleared the overlook, but Hillary was still speaking, still making history. I thought about how far we’ve come, how much I’ve grown up, as Hillary’s voice faded quieter and quieter… until silence. I was extremely confused. Was NPR fading out to start a new program??

And then there was the click of everything dying.

My car battery died. Of course. Oh, how quickly I felt not very adult at all. My husband was working and was not picking up his phone. Of course. Of course I am a child who doesn’t understand how cars or radios work. I called a friend. She was on her way.

I found the jumper cables in the back and waited. In the dark. With the opposite of Hillary’s encouraging words to listen to. All I had was the laughter of my own thoughts as they mocked how “far” I’ve made it in life. Dammit.

About five minutes later, in the absolute dark, a car pulled up. Not my friend’s car. It parked noticeably far away from my car. This car was either here to murder someone or round the bases with their high school crush. Considering my options—hero, victim, or buzzkill—I made my way towards the car.

I got too close to the car before anyone saw me for it not to be the most awkward thing in the world. I got close enough to obviously see this was the latter of my choices and I was about to be the biggest buzzkill. I startled the couple and motioned to roll down the window. I did this in the way that children born in 1999 or 2000 have no idea what I’m pantomiming—the big wooshing roll of the manual windows.

– Uh, sure. Do you have jumper cables?

I called my friend and told her I found a jump. The car pulled up to mine, but not close enough. I had to tell the boy [the driver] to get closer. He quickly told me

– I’ve never done this before. I don’t know how to do this.

– We’re gonna be okay. Thanks so much.

I felt old again. I felt the familiarity of where he was, where the girl in the passenger seat who never left the car nor would hardly look at me… I knew where she was. I knew the uncertainty of jumping a car. I knew the freedom of being out in the middle of nowhere in a shitty car. I felt old in this way. Old in the knowing way.

I popped the hood and connected the cables. As I was connecting them to my car, I paused and stood up

I told Max to start his car. We waited. I started my car. It started.

I high-fived Max and thanked him over and over. Then, in par-for-the-course fashion, I said

– Sorry if I interrupted anything fun or important.

He awkwardly laughed at this stranded lady who must’ve seemed 100-years-old. We parted ways and I turned on the radio to hear just the recaps of Hillary’s speech.

It was perspective at it’s best. Humbling. Comical. Triumphant. Reflective.

I interrupted some frisky teenagers so that I could help them help me out. All so I could listen to our first woman presidential nominee speak and drink beer.